Yusuf Tura came to Seattle as a lone refugee from Ethiopia at age 16 to escape war and conflict in the country at the time.

Today, the Seattle cab driver’s life has been transformed by a decision he made after returning home in 2007. When he got to his home town, he was shocked. All the trees had been killed off and stripped away by pollution from stoves that burn wood and dung. The dirty fuels fill the area with smoke and coat leaves, killing the trees.

In addition to deforestation, pollution from open cook stoves is responsible for killing more than 4 million people per year, according to the World Health Organization (WHO).

When he returned to Seattle, Tura launched operations for ObamaStoves with no investor help. The company has now sold about 255,000 clean stoves in Ethiopia for $10 a pop, all while making a profit.

No one has ever been able to get a program like this off the ground without investor help, said Luni Libes, the founder of Seattle-based social entrepreneur startup accelerator Fledge.

“There’s nothing like it,” Libes said. “The industry of (clean) cook stoves has been tried and tried and tried for years by nonprofits and government, and nobody’s ever done that.”

Libes accepted Tura into the Fledge program despite his application only being half done based on his rare success story. Tura participated in Fledge’s 10-week mentoring and education program in 2014. Fledge also invested $17,000 in the company in 2014 and Libes himself donated enough to get the company a delivery truck in Ethiopia.

Fledge itself has two other cookstoves companies in its portfolio – Burn Manufacturing and Kike Green Cook – which are also rare examples of profitability but got there with some funding help.

Tura is now in the process of raising funding via Indiegogo to help bring the stoves to more people in Ethiopia.

The company’s name was originally different, but customers in Ethiopia insisted on calling it ObamaStoves since it launched as Barack Obama was in the midst of his presidential campaign. The presidential candidate was drawing scores of attention for expectations of the outreach he would do in Africa.

In addition to safety issues, the WHO has identified providing cleaner and more efficient stove and fuel alternatives to about 2.8 billion households worldwide that depend upon wood and other solid fuels for cooking. The move could be one of the most effective ways to mitigate short-lived climate pollutants.

Obamastove (Ethiopia) has survived years of civil unrest and a pandemic. Despite all these challenges, Obama stoves are still selling as fast as we can make them. 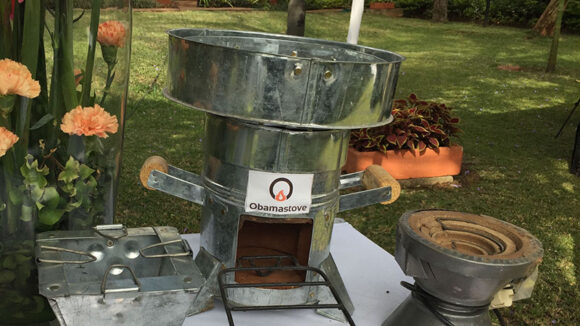 Obamastoves began in Ethiopia and has now expanded into Kenya through a joint venture with Kencoco, a manufacturer of charcoal briquettes from coconut husks, based in Mombasa.

There are two ways to make a cookstove. The modern (and expensive) method is in a factory with hydraulic pressing to cut, bend, and shape steel plus welders to connect steel and powder coating to prevent rust. This path costs millions of dollars to set up, and the stoves produced retail for tens of dollars in price. The other way is for artisans to make the stoves, one at a time, using little...

What does Star Trek have to do with cookstoves in Ethiopia? Gene Roddenberry, the creator of Star Trek set up the Roddenberry Foundation, and the foundation has granted $12,500 to Obamastove to help expand production.